Moving Buildings: 5 of the Biggest Structures Ever Moved

Moving Buildings: 5 of the Biggest Structures Ever Moved

Have you ever seen those double-wide trailers coming down the road with “Oversize Load” disclaimers on the back? If you have, you’ve probably watched in shock that a whole house could be picked up and moved, just like that.

If this sounds like you, guess what: Those trailers are among the smallest things that can (and have been) moved by structural relocation companies. While moving buildings used to seem impossible, modern skate technology has made it possible, if not (practically!) easy.

Keep reading and learn about five of the biggest buildings to ever undergo structural relocation! 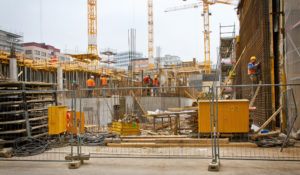 What happens when you’re a wealthy man in the 1920s who falls in love with a building that lives on the other side of a massive ocean? You have it moved, of course.

That’s exactly what Thomas Williams Jr. did with Agecroft Hall. The hall was originally in Lancashire, England, but Williams wasn’t. So, he had the 180-ton estate disassembled piece by piece and put back together again in Richmond, Virginia.

Despite a few small changes, the building looks almost identical to its original iteration, built in the 1400s!

The Belle Tout lighthouse is a beautiful 1829 structure in Sussex, England. It sits on Beachy Head cliff. When it was built, it was a good distance away from the 300-foot drop to the water. Over time the cliff eroded, leaving the lighthouse merely feet from the edge.

In 1999, tickets were sold to watch the lighthouse being moved in an effort to fund the project. Luckily, all the financial needs were met and the lighthouse was moved 164 feet downland, away from the cliff.

It might not be the biggest structure ever moved, but it’s certainly the biggest moved in New York City. In the 1990s, Times Square underwent a huge revitalization. At that time, the Empire Theater was deemed unfit for the new look.

That’s what led to it being moved 168 feet down the road at a rate of one foot a minute. It ditched its roots as a burlesque house and is now a massive AMC movie theater.

Brown University changes up their landscape a lot. For instance, they’ve moved 26 buildings around their campus in their history as a school. Perhaps one of the biggest is the Peter Green House.

Originally built in 1890, the school needed to move the house to make room for a new park area called “The Walk.” It looks almost identical today to its original form, despite being turned 90 degrees in the process. It still serves the same purpose, too: housing the History Department.

In the 1980s, the city of San Antonio, Texas wanted to build a new mall and swanky hotel to accommodate the city’s rapid growth. Unfortunately, the site was already occupied by the Fairmount Hotel.

Built in 1906, the Fairmount had become a San Antonio institution but fallen into disrepair. It was safe to say it was ready to retire to a life as a historical monument, so the hotel was moved to the city’s historic district about five blocks away.

It took a crane, 36 dollies, and $1 million to move the Fairmount to its new home.

Moving Buildings Got Your Head Spinning?

If you love your building but want to move it, we can help. We’ve been supplying house/structure movers with the equipment they need for years – like building moving skates. We even helped with a Wisconsin local tavern move – it may not be the largest building, but it was important to the community.