We often look at inspiring architecture with awe, marveling at how a structure could have been built before the development of modern structural techniques. It’s all the more shocking to find out that a structural relocation took place, bringing the original building to a new location.

Famously, William Shakespeare and a group of friends helped to dismantle and rebuild the original Globe Theater on the other side of the Thames. Imagine if they had been able to move the building without removing a nail! 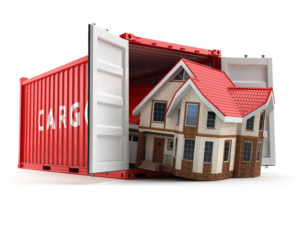 Below are five famous examples of structural relocation that managed to do just that.

The playing field for the Detroit Lions used to be the site for the Gem Theater. In 1999, the building was moved four city blocks downtown. The physically attached Century Club made the move more difficult. In order to accommodate the move, the Century Club was fitted with steel framing.

Both buildings were lifted simultaneously, and then placed on 70+ dollies that were each the size of a small sedan. With the wide range of skates and dollies available, relocation projects like this one have become more common than ever.

Captain Cook’s 18th-century cottage was built by his parents in North Yorkshire in the United Kingdom. When a later owner decided to sell it in 1933, an Australian bought it and donated it.

The cottage was donated to Victoria, where Captain Cook first landed in Australia. It was dismantled brick-by-brick and shipped abroad. Even the original ivy from the English site was replanted along the walls of the new site.

The London Bridge has been replaced every few hundred years. And, interestingly, one iteration of the bridge now resides in Arizona.

John Rennie’s bridge was built following an engineering contest held by the city. The Scottish engineer’s bridge was so strong and popular that its heavy use caused it to begin to sink into the Thames river. After the city put it up for sale, an Arizona oilman bid on it for 2.5 million dollars. He then brought it to Arizona in 1971.

In 1960, a dam in Egypt demanded that a stone pyramid had to be relocated. Originally commissioned by Ramses II, the Abu Simbel Temple was designed with giant images of the pharaoh. It ended up becoming a tourist attraction for centuries.

For the move, each of the temple’s one thousand blocks was numbered and carefully dismantled. Blocks weighed an average of 30 tons each, making it one of the biggest structural relocation projects in history.

This more recent Chinese structural relocation now holds the record for the largest building in history to move. The Fu Gang Building in the Guangxi Province was moved structurally intact, without being dismantled.

Although it only moved 120 feet, it took more than 10 days to move. The 33-million-pound relocation is listed in the Guinness Book of World Records.

Make Your Own Structural Relocation History

While these types of moves are exceptional and mind-blowing, with the latest high-tech methods, they are easier than ever. If you’re struggling to plan your own relocation project, contact us with any questions. We have the perfect relocation solutions for everything from single-family homes to entire office parks.

About the Author: Andrew Shea